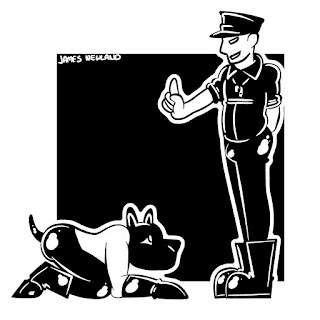 Punishment to me means two things in kink, there is the kind of “punishment” above where a sub gets a flogging as part of a scene ultimately for their and the Dom’s enjoyment.  I always say to my subs that if you want something ask for it, you don’t need to play up to get a flogging and I don’t want you too.

The other kind of punishment is to correct misdemeanors and to modify the behavior of a sub.  For me I will only do this with subs I own or have contracted.  To me it’s the kind of thing where limits need to be discussed and the Dom particularly should be aware of the psychological impacts.  Punishment should be within agreed boundaries, fair and proportionate.  I’ve come across too many people having bad experiences with Doms that have left them not wanting to do certain activities or being left wary and untrusting of Doms.  Don’t be that Dom.  If need be break the scene and discuss what has happened rather than diving into anything.

Most important is knowing when not to punish.  There are times when punishing for incorrect behaviour is not the right thing to do, and it may happen when the most important rules have been broken.  At that time more than ever your sub may need your kindness, compassion and comfort.  This may be difficult when you feel that you have been let down but you need to look at the wider context of the behaviour and take account.  You may also need to give yourself time before you react.  I find frequently that being a Dom isn’t about being the bad tough guy (as fun as that can be), but my most common role as a Dom is that of a supportive mentor.

However, in the right circumstances punishing for incorrect behavior can strengthen the Dom/sub relationship.  The trouble with punishing subs using physical means is that fairly frequently they are masochists.   To me, there are four types of punishment and the type of punishment handed out should match the misdemeanor and the sub.

Sometimes the most effective way of punishing is just to tell a sub they have been bad and displeased you.  “Bad pup!” can strike to the heart of a puppy.  Subs often want to please their Dom, and just being told they have can be enough to make them stop in their tracks and the disappointment of their actions can be enough.  Don’t turn a reprimanding into a belittling session though.

Another form of punishment is to use various ways to reinforce the position of the sub and re-exert your authority.  I’ve done this by taking photos where Rook had to write “I will follow my Boss’s orders; swiftly and obediently” and I then posted that photo online.  I did get his permission to post the picture, although I was clear that I wanted to do it.  But be careful about humiliation.  While it can be a useful tool it can also be damaging to a sub and to your relationship with them.

Other forms of reinforcement could be making them do a menial chore, writing lines and so forth.  When the task is done, praise should be given and the misdemeanor should be left in the past.

As mentioned, if your sub is a masochist this may not work, that said there is a distinction between pain for fun – say a flogging with a slow and gentle warm up, and a harsh beating that is hard and has no warm up.  There are other ways of administering physical punishments.  When Shadow used to test me on one occasion I ended the session and sent him home with deep heat on his balls.  This was a very harsh punishment but Shadow was experienced in SM and we had agreed that I could punish him how I liked.  Other forms of physical punishment could include forced workouts and stress position bondage.

I think this is the harshest punishment.  In the early days of playing with my pup Shadow he would try and test my boundaries.  He used to top and Dom so he was seeing if I could follow through and dominate him.   When he tested I would withdraw contact for a period of time.   It was effective.  He soon learnt that I was serious and the testing stopped very quickly.   Withdrawal can take the form of pausing a session and making a sub sit in the corner for a defined period of time or more harshly ending the session.   After this kind of punishment I would make it clear that the misdemeanor has been atoned for and it is in the past.

Having said all this, it’s rare that I use punishment.  The pack know the limits and when not to push me further.  But my Dom style is much more collaborative and while I’ll make sure I get what I want out of a sub or pup, most frequently we achieve it together as part of a shared agreed goal.  Maybe that goal isn’t reached on the first go, that’s ok, as long as we’ve both had fun and made progress then that’s the main thing.  Sometimes it’s about playing the long game.