The Descent of a Pig 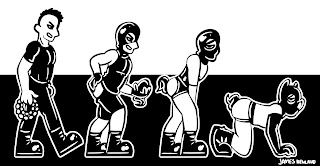 How I got into kink

I think it’s always been there really.  I describe it as an itch deep inside that needs scratching.  My early formative experiences were “fooling around” with a lad who was my age but in the army cadets.  We both said we weren’t gay but we both ended up in camos wanking in a small wooded area at the back of my house.  One time I ended up sucking him off. I’d wanted that for a long time.  Although all the while I’d been going to Church and praying not to be gay.  But I still ended up looking at porn online.  At a time when it took a very long time to download an image over a 14.4k modem…

Aside from the army gear, I also had a thing for tight lycra gear and swimwear.  I got a pair of “skintights” long tight swimshorts that I wanked into on more than one occasion.  And I wanked off into a wetsuit I had too.  I think they were the precursor to the rubber fetish.

I then slowly got some clothing.  A leather waist cost (yes grim I know), some rubber shorts.  As I got older I got into more, and developed kinks for rubber, gasmasks, and well pretty much everything.  Mostly funded by my student loan…

At this point play was very sporadic.  I had some ok sessions and some really bad.   The bad ones taught me how to top, as in time as I discovered my Dom streak I’d flip and use that along with what I had read to give subs better experiences and take them to the places I wanted to go to.  But that said I identified as 100% sub at this point.  But I was a pushy sub.  A very pushy sub, in the worst of ways. I think the worst session I had was with a local Dom who gave me a spanking session.  There was no warm up at all and it was just unpleasant.  Too much too fast on a new meet.  I’ve never actually had the kind of spanking that I’d like to receive.

When I started playing with other guys as part of an open relationship I started to discover that I enjoyed fucking and started taking more of a Dom role.  I started expanding my skills.  On one occasion I gave a friend a really hard spanking, it was a long relaxed session with his ass slowly changing colour.  By the end I was going really hard on him and he was loving it.  I even used a police baton and a baseball bat.  But I ended up stopping as I was drawing blood.  The photo the next day from when the bruising came out was really something…

I fisted as a top for a fair bit.  And I had a false start on being a fist bottom.  I took it once and then not again for a long long time.  So when I owned Storm I decided that I wanted to get fisted.  I set a target to do it before the year was out and did it in 3 months, slightly ahead of target.   Storm and I very much click when playing and we have a heap of filthy fun.  One time in a hotel I farted over breakfast and unleashed a torrent of lube into my jogging bottoms that I couldn’t hide as we walked back to our room.  All of the pack fisted me over London Fetish Week(end) 2016, Storm, Rook and Shadow. We’ve also used baseball bats, Storm and I have been to Hard On in full American Gear (and literally bashed guys with our helmets and annoyed them).  There was also a time when I was being fisted when my howling set the biodogs off howling.  Then on another occasion I literally dragged Storm out of bed after a fist orgy to punch my hole.

By this point I knew full well I was into power.  But I discovered a local pup, Hroar.  He mentioned on twitter about getting his head flushed down the toilet.  I said I was game for it, and the rest is history.  We discussed it and I found a café that had a toilet that was away from the seating area and perfect for use.  So, I bogwashed the filthy pup and even ended up making him do it himself on order.  He’s a subby puppy.  As he is into sissy stuff I then played with public humiliation and made him come out with me in a very short skirt.  That culminated in a pre-Christmas Ann Summers trip where I made him ask to try on a skimpy Christmas outfit and record a video.   While the sissy kink doesn’t turn me on, I certainly enjoy power play.

I guess now I consider myself flagging orange.  I’m pretty open to most kinks by this point.  Weekend just gone I was pissing in an empty bottle for Cannon and Hroar to drink, I fucked Rook in Alert and took his fist and helped Teck pup get his tail in.  A very fun evening!

If you still want more go take a look at my xtube!