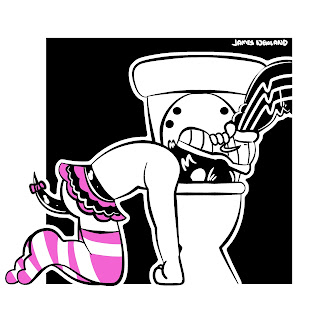 I haven’t classed myself into being into humiliation until fairly recently, but I think with humiliation it is a case of matter of degrees and I had been into it, but things have escalated on the kind of humiliation I do.

Humiliation crosses into the dark areas of kink.  It is about the Dom reducing the subs status, but taking that further than a regular session would.  I very much see it as being able to act out being a bully and exerting power over someone – both things I very much enjoy.   But humiliation is a very personal thing.  Calling someone a pig may be a source of pride and how they identify for one person, but another may find it deeply humiliating.

This is very much a type of play that targets very human emotions.  For this type of play I always have a detailed discussion with the sub about what they want to do and why.  Is there anything driving this, were they bulled at school?  Do they have any mental health issues I should know about?  While humiliation can be great fun and a real power trip for a Dom, we need to make sure that the sub is able to handle what is planned.  You also need to make sure that you can provide appropriate aftercare and help a sub if they do react badly to something.  Needless to say, safewords should be in place, and check in with your sub that they remember them.

For some being called names may be humiliating enough, being called a slave or pig may be humiliating in itself.  For others more intricate things are required to take them down.  Pup Hroar who I have played with is very much into humiliation play.  When he posted on twitter than he wanted someone to flush his head down a toilet I was very much up for it.  We had met each other before and played on a couple of occasions and we discussed the scene in depth before doing it.  I found a café with a toilet that was suitable for use, but would be fairly quiet.  That session went well, so we did it another time and this time I made pup put his own head down the toilet and flush it. It was a heap of fun, I enjoyed playing the bully and Hroar enjoyed being bullied!

It was also clear that Horar was into sissy and fem type things as a means to humilation.  While it does nothing for me sexually I was interested in making Hroar walk around town dressed like a sissy.  He duly had to meet me in a very short skirt and long pink and white striped socks, and I walked him around dressed like that.  Deliberately taking time choosing things in a supermarket to make him wait and squirm.  I think I had a rather big grin on my face watching him suffer but also knowing he was enjoying it.

I can’t really explain what the sub gets out of it, so I’ll pass over to Hroar to try and explain in his own words:

How can I enjoy being humiliated? How can anyone enjoy it?

Well, for me, although there's obviously various factors, I know that one of them is attention. I'm a complete attention whore. I like the attention that a Dom gives, when they're carefully watching you squirming in the uncomfortably skimpy outfit they've made you wear out with them, or the attention that a crowd of people give you when you notice something out of the ordinary.

However, this was only manageable with Vulferam because I trust him, wholeheartedly. There's no way I would go out in a skirt and pink socks/hoodie with a Dom I barely knew. I simply wouldn't feel safe, and then the worry about what might happen would overwhelm.

Also, humiliation doesn't necessarily have to come from public play. I frequently post photos of myself in humiliating scenarios/clothing/etc on my Twitter profile. Again, the attention I receive from my followers drives me forward, as well as the thought that what I'm doing or wearing is so low that most others wouldn't even think of doing it.

There may be some who think that enjoying humiliation is a sign of weakness, or mental illness, or maybe some past trauma manifesting itself. I can outright say, I don't feel weak, I don't suffer from any illnesses, and my childhood was as innocent as my mother could have made it. There might be a few who do it to themselves in a punishing manner for their past sins, but I think the majority of us who enjoy this don't (and definitely shouldn't) feel ashamed or upset. It's what we like, and it's not hurting anybody (though maybe turning a few heads).

I feel something should be said for those who don't like humiliation, or maybe aren't sure. It's important you set out with your Dom(s) what you are okay with, what you're not okay with and what you aren't sure about. And similarly for the Dom, too, for example, it was quite a surprise from Vulf suggesting he take me out Christmas shopping (busy period, of course) in a girly outfit, because I knew this wasn't something on his list. But also then, when trying the uncertain things, make sure you both have a way to back out: generally a safeword, or some action you both understand. This allows you both to try out something and see if it'll be fun for you or not. You shouldn't have to feel bad about using the safeword, especially if it's not enjoyable for you.


Another good question is what actually constitutes humiliation. There's a variety of situations that would come under this, and may be even be considered in the category. For example, bootlicking is a common task to give a slave or sub, but ultimately is intended to degrade or humiliate them, by showing power over the sub. Also bogwashing (head flushed in the loo), whilst triggering some piss pig fantasies is very humiliating. Simply being on a leash could be considered humiliating. Often just being treated as less than an equal.

You will find most subs are okay with some level of humiliation: after all, it's what they want. They may only be interested in one-on-one degradation, a room full of Doms watching them in a scene, or even a room full of strangers. Personally, I don't care as long as I get photos to then show even more people, but I'm just a glutton for that. So long as the Dom knows it's what they want, and can give it to them.

Finally, I'd like to say, I've not been in the scene for long (just over a year now), but my time playing with Vulferam has shown me a lot about what I want to get from my play sessions, and just as much about what I want to get out of my life, my work, my money. It truly can be a revealing experience and teach you a lot about yourself, when you indulge in your fantasies and try the things you're unsure about.

Thanks for reading, and thank you Vulferam for allowing me the space to share my thoughts.

Pup Hroar (@PupHroar) is the bestest puppy ever and deserves all the scritches. Or whatever testimonial you want to write here.

Oh wait, I was supposed to edit that.  Ahem.  Hroar is a sissy that needs abusing!

So for Hroar the essence of humiliation is the power exchange, being made to feel low and about receiving attention.  The important thing is to make sure that these things are done in a safe way and that the Dom can protect the sub both in the event of needing to stop the scene from a safeword and from realising the situation is heading towards unsafe.

When I have taken Hroar out in public dressed up I have always been reading ahead, who is around that could pose a threat?  What action would I take to protect Hroar?  As a Dom if you are potentially putting a sub in a vulnerable situation you need to be prepared and be able to deal with it.

You also need to consider the people you are around and their limits.  I had someone once ask me to fist them somewhere that was publicly visible – the exact location they wanted would have meant being visible from an estate and from a neighbour who was a policewoman.  Not a good idea!  But we negotiated and I found somewhere more secluded where the outside risk of getting caught could be better managed.   As a Dom I need to be mindful of protecting the people I’m playing with, be that from the general public if out and about or from getting caught if playing somewhere more risky.  As a Dom I need to keep control of the scene and manage the environment around to ensure safety.

Once the appropriate safeguards are in place humiliation can be a lot of fun.  Thought it isn’t usually a kink that gets me hard, it’s much more mental and it’s a kind of kink where I enjoy the power and making someone else bend to my will and that’s a great deal of fun.
Posted by Lord Vulferam at 13:17