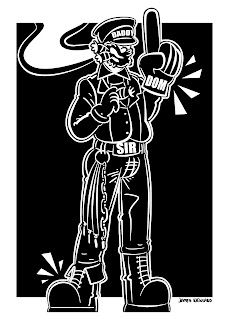 However, there is an idea that this archetypal Dom is infallible.  They are always right, all knowing and are able to dish out exactly what the submissive needs at the right time.   Unfortunately, the reality is somewhat different.  As a moderately experienced Dom, I am not infallible.  I make mistakes, I fuck up and I don’t always handle my subs the right way at the time they need it.  And do you know what?  That’s ok.  What is important is as the dominant how you handle that.

I’ve fucked up in scenes and made mistakes and hurt people. It’s not fun to be on the end of doing or receiving. There was a session with Rook where I was using a new electro box, and when telling him to expect a tingle he got a full power blast – my previous box reset after powering off, the new one didn’t.  I turned the box off immediately, removed the electrodes and apologised to Rook.  This is key, I didn’t pretend it was intentional, I didn’t make him feel like I had done it deliberately to cover up and protect my ego or Dominant image, I made a mistake, dealt with the consequences and owned it.

I see and hear of too many “Dominants” who think that being dominant, is of itself all that is needed to be a Dom and to own and control others.  It isn’t. Not by a long way.  As well as being dominant, you need the skills to apply BDSM but more importantly you need empathy and to respond to your submissive.  They should be the one driving how you dominate them.  To my mind a successful Dominant/submissive dynamic is one that is collaborative and based on honest and open communication.  If one side is imposing their will on other without listening, then disaster is inevitable.  I’ve deliberately said that both ways, as a pushy bottom can be as destructive as a pushy top, in undermining the dominants ability to control and their confidence.

That said, with a sub I will sometimes nudge or push them to do things just for me as part of a scene or a weekend.  Often, I will make a sub make or fetch me drinks, maybe run out and grab me breakfast.  Sometimes a sub is reluctant to do this, but if as a Dom I ask something (reasonable) I expect it done.  I have often gone to great lengths to plan a session, may well have traveled for it, and I expect a sub to pull their weight!  But the key to that is it will be a very small part of what has otherwise been collaboratively negotiated.

The real trick of being a good Dom is about balancing the power dynamic, about making the sub feel that they are not in control and that you are making and forcing them to obey your will, but actually you are using their responses and feedback to gauge how much control to apply.  This is far easier with playmates that you have known for a long time.  I always start slow with new playmates and would much rather have a number of sessions that are “tame “and go well to build on, rather than have a new session throwing everything at it and pushing limits, where the sub ends up safewording and I then have to support and deal with the aftermath of my creation.  Play the long game and take you time, build bonds, trust and communication and then you can slowly work on going further from a successful base.

The other dimension to this is the emotional and managing relationships, boundaries and forms of friendship and love when connecting with people on what can be a deep and primal level.  However, this deserves its own time but again, it is not always something I get right.

I am a fallible Dom, and that’s ok. But be honest, open and communicate.