Where's your head at? 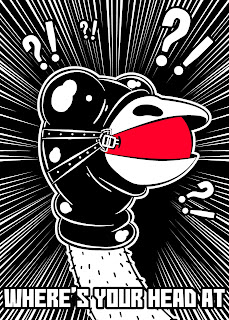 Given a range of levels of headspace, there are many ways into headspaces: gear, sensations, dirty or trash talk, imagination and acting out a fantasy or a combination of all of these.  It usually occurs as a gradual descent into this place as a scene progresses until people are ‘there’.  I've mentioned before about the experience of fisting and how it seems to link your mind with you hole.  However, headspaces in scenes don't always go to plan or come together.  Maybe underlying stress or daily issues prevent you from relaxing totally into it, or the scene doesn’t come together the way you had in your head and the details jar at you.  Sometimes the fantasy isn't what you wanted after all, and when faced with reality it needs to just stay fantasy.  Any number of things can stop the fantasy turning into reality on the day and stop you getting to that special place.

After the session I focused on the sub, gave them the aftercare they needed to come down from the sensations and plenty of contact. Then we cleared up, not an insignificant task after that kind of play, and then settled down for the night.

Experience has taught me that when playing I don’t have to do everything that was suggested and negotiated.  Indeed, for the bottom they had made a real achievement and was ecstatic with their progress which I shared in.  However, afterwards I needed to work through my frustration, and decided that with the sub in such a happy state they were not the best choice for it.  I did however check in with the sub and make sure they were ok after the session.

While sometimes we can process things on our own, often it is useful to talk.  I’ve said about the importance of communication and sometimes after a scene it is useful to debrief and go through things.  On this occasion I spoke to some friends.  They reminded me that it is ok for things to not always come together.  Next time I will make changes before I play and I hope that will help me get there.  But sometimes we just need to accept things for what they are, and this occasion was probably one such time.

However, on reflecting, by carrying on the scene and giving the bottom the experience, things were still very, very messy.  So the session would probably be beyond most people’s limits and up in the top percentiles of disgusting scenes.  But when you play in such areas sometimes that isn’t quite enough.  But it’s ok not to get there every time and to build on the experience, make adjustments, and try another day.