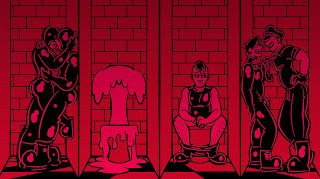 It was a dark winters night.  I left my hotel and walked the short distance to the club.  I queued up.  It was cold and dark, but at least it was dry.  There were a few guys in front of me, the queue was moving slowly, but bags were being checked and guys were getting in.  After a while it was my turn. I didn't have much in my bag, just a rubber jock, top and hood.  Quick check, pay my fees and then I was in.

I quickly took my trackies off and put my rubber on, checked my bag and then headed straight to the darkroom.  I needed to let off steam and tonight was the night, I'd been looking forward to it.  I found an area where I could put my head down and ass up for anyone to breed me.  I put my hood on and waited.

Before too long it started getting busier and my first fuck of the night pushed into me.  Bareback of course.  This was one of London’s sleaziest club nights, not that there's that many left these days.  He fucked me, shot a load and moved on.  Only moans were exchanged, no words and talking. I ended up changing positions a few times and bent over a metal bar at one point.  The guys kept coming and fucking me and unloading in my ass.  As the club got hotter and the music pounded I needed to take my hood off.  After load four I needed a drink.

I headed downstairs to the now full club, with a few guys in rubber gear, but a fair number of the crowd in jocks and harnesses.  I didn't care how people were dressed, or even what they looked like in the dark.  I just wanted breeding.  I went to the bar and got a coke.  It was a bit cooler than the dark room, the break and drink was needed, but I wasn't done for the evening yet.  I went back upstairs.

It was busy but I managed to get my spot back.  I got back in position and a guy came behind me and started fucking me.  He complained I was tight, I was most indigent.  I'm a fist bottom, how the fuck can I be tight?  I focused on breathing and he dumped a load and then wanted me to suck him clean.  I know the rules of barebacking and happily complied.  I then had one guy give me another fuck and then I decided to call it for the evening.  I'd taken six loads and it was about 2am and the darkroom was unbearably hot.  I got my bag, threw my trackies on and then went back to my hotel room.  I had a cup of tea to decompress from the evening and get the noise of the club out my ears, then settled down to sleep with loads of anon spunk in my hole.  A good result.

The next day I needed the toilet in the morning I rather exploded.  Sometimes a day or two after douching it messes my bowls up so I didn't think much of it.  I checked out my hotel and headed home, had a lazy evening and then went to bed at a sensible time, I had work the next day.

The Monday morning I exploded again, I figured it was just douching aftermath.  But at work I kept needing to go to the toilet rather urgently.  I took some Imodium (I usually keep some in my wallet, fist pigs tend to have certain things to hand in case) and got through the day.  After a few days I noticed it wasn't really settling down, so I made an appointment at the clinic thinking I'd better get checked out.  It took a couple of weeks to get the appointment, and by this time I'd had to take a few days off work as my guts had been so bad.  I had an almost constant feeling of needing the toilet and had bad dialarhoea.  I also booked a doctors appointment as I figured I should cover that base too.

The clinic appointment came and I told them what I'd been up to and my symptoms.  They asked if I could do a stool sample but by the late afternoon time of the appointment my guts had evacuated themselves and I couldn't produce anything.  Though sometimes there was just mucous when I felt I needed to shit my guts out, there was nothing.  I did the butt swaps, bloods and urine.  All the results came back negative.  I didn't understand, something was up.

Fortunately I had the doctor appointment as well, that was first thing in the morning and I took a fresh sample in this time in a plastic bag and put that in the pot. The doctor told me I was doing right by making sure I was drinking enough.  Told the doc and the clinic I was being careful and not bottoming etc while this was going on.  After a few days the sample came back.  I had shigella.

That was an answer that made sense.  I went back to the doctor and picked up the antiobotics.  Great, I thought, take the tablets and get this sorted.  I was getting sick of my guts exploding.  I'd literally have to plan my days and travel around access to a toilet and it just felt unpleasant, having a sensation of needing to shit all the time.  I took the tablets and finished the course, but things still didn't feel right.  Then came the letter from environmetal health.  Yep, Shigella is such a big deal because it is so easily spread.  I was as honest as I could be on the form, but it was basically 'good luck tracking down 6 anon guys from a darkroom.

Time was passing.  It was January.  I went back to the doctor and they did another sample.  Results back, I needed different antibiotics.  I went in, got those and took them.  Just as I finished the course, I moved up to Manchester.

But after the course things still were not right.  I didn't understand it, I'd taken all the tablets as I'd been told too.  I went to my new Doctor in Manchester and explained what happened.  The doctor got my records up and found the lab results.  Turns out it wasn't just shigella, it was antibiotic resistant and the lab had recommended another set of antibiotics if the others didn't work.  The doctor hadn't even heard of them, he said that if the lab said I needed those, then he would trust the lab.  "I don't care, give them to me" was my reply.  I was desperate to end this. My guts had been in turmoil for some 3 months by this point.

As well as the daily discomfort it had now wrecked my sex life.  I hadn't been able to fist bottom for sometime, and I was being super careful not to put playmates at risk.  I was mostly just fist topping.  Which was fun, but I was missing getting my hole abused.

I got the antibiotics and took them.  I figured they must be a fairly nuclear option, so I expected to have some problems after.  When I finished the course, things got better. I didn't have the feeling of needing to shit all the time.  But my shit was still loose and sometimes there would be mucous.  Back down the doctor...

We had a talk and he got me on the table and pushed and felt my stomach and guts.  He said it sounded like I had post infection IBS, which could take anything up to a year to settle down.  I was crushed.  I missed getting fisted so so much.  But I knew the risks I was taking when I played in that club, but I didn't expect shigella and I did not expect anything to cause this much fallout.  It must have been the cock I sucked, the guy must have been in someone infected before me.  It's easily passed from ass to mouth.  I then decided would not be sucking dick or eating ass at clubs again.  Not worth the risk of me not being able to fist.

But now what?  I got myself some strong probotic tablets from Holland and Barret.  A friend with IBS sent me an article on foods and drink to avoid.  I cut down on onions and garlic, I was already avoiding chilli, I reduce the amount of milk in my diet using oat milk or coconut based milk in coffee and smoothies.  I also reduced my drinking, I cut out beer and reduced the amount I drunk in general.  Slowly, the tables turned and my stomach started stabilising.
By the end of May I started playing with toys again, and then in June I was able to play in Alert and take a fist.  Things are still very hit and miss, and it’s frustrating when things play up.  I know it will improve with time.  Meanwhile, it helps that my playmates are being understanding on the off days.

I really hope you don’t come across Shigella.  It’s really nasty.  If you have extreme diarrhoea after sex and it doesn’t settle after a day or two, please get down the doctor or clinic and get checked out.  It’s important for your health and to stop it spreading.

Have fun, be safe, and look after each other.