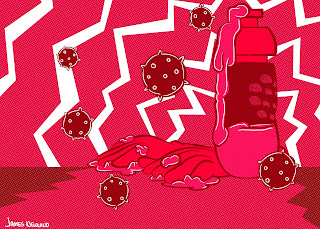 Being told you have it sucked, treatment sucked.

Headaches, sleepless nights and fatigue were the worst.

Being told made me feel sick.

It was doing a usual STI check up, I got the call from the clinic, not the feel good text. I thought it was going to be gonorrhoea. I called back, the nurse explained in a normal every day voice, no nicey nicey here. Boom! Tears, in the middle of the office. I had to wander off. I didn’t expect this at all. Not one bit. I was asked of it was unexpected by the nurse. I felt sick, that, fall to the floor hands in head sick. I felt so dirty inside. Having been told I was HIV+ would have been easier. Of all the things I dreaded catching was this. This was the worst.

Numerous studies demonstrate that the prevalence of hepatitis C is higher among the population living with HIV (particularly among MSM) than people who are do not have HIV. The greater likelihood of coinfection with hepatitis C is they are more likely to have sleazy raw bb sex. You know, the really hot kind.

HepC treatment has come a long way, its very expensive. However, it doesn't stop you getting it again, you don't become immune, and there are different strains which require different treatment. Currently the NHS allows 1 treatment per person. Before they are willing to give it to you. They asses you for eligibility, such as willingness to changing your behaviour (giving up drugs).

While I won't be talking about sharing needles or straws as a cause for infection, which hopefully is a given. Some extreme (well.. extreme to some.. pure bliss to others) sexual activities pose a risk.

• Sharing tubs/bottles of lube or sex toys is also risky. The hepatitis C virus is fairly robust and can survive potentially up to 48 hours on the surface of a sex toy or on and in a tub/bottle of lube.

This means to us fist pigs, probably the biggest risk we take, even when wearing gloves, is grabbing the other persons lube bottle by mistake, or 'just use mine' you know, when someone makes it too thin or they run out. We worry what’s inside the glove when we need to be conscious of the outside too.

Used gloves should be taken off and tuned inside out but tie them off for good measure.

A few small changes in behavior and we really can reduce the risks to yourself and others.

I got though it. But I learnt a lot. I play pretty much the same as I used to, only I'm such more aware of where my hands go with bottles or gloves, I don’t play raw handed. I don't do drugs anyway. I'm much more aware of my play scenes.

This post is a guest post from a follower who wanted to talk about their experience of HepC.