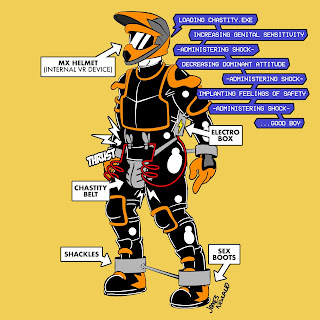 A couple of years ago now I started exploring subbing more.  The pack had gone their own ways (amicably I hasten to add) and it left me free to explore.  I’d already made a conscious effort when moving to Manchester to integrate kink better into my life, but I then had the opportunity to explore submission and see how things went.

As I started to get into subbing my Master mentioned the idea of being locked and we spoke about it a fair bit.  My interest piqued as a way for it to help explore my submission.  I had a chat with a Dom lad who was into chastity and we did a scene where I was locked, it was hot.  So, after locking for a few hours for a scene, I started to lock from a few hours then building up to a day at a time.

I already had a CB6000 device from when I had subbed a long time ago, so I tried that first.  It wasn’t very comfortable so I couldn’t manage for long, it tended to pinch and was a real faff to get on, so, on suggestion from friends I then tried on a few other devices.  First was a pink holy trainer knock off from House of Denial.  This became my go to cage, and somewhat appropriate for a locked little mare.  I also got a small metal cage from Wish, b e careful if you buy these cheap cages though, I had one lock where the key got stuck and broke off. Fortunately, I was testing it on the device before I put it on!  I’ve also seen problems with the cellmate Bluetooth device, the build quality has issues – some people have had them shear and others reported problems with the waterproofing.  There are also some concerns around the app.  I finally borrowed a real holy trainer for a while, which was much easier to get on with.

As I settled into wearing the cage more I wanted to do longer periods locked.  One of the Sirs I play with kept me locked for three months, although I struggled to stay locked overnight, often waking at 3 or 4 am trying to get hard with a severe aching in my balls. I tried a few times to get past it, but it was difficult when I had work the next day, so I came to the conclusion that I needed to unlock overnight, so I’d lock in the morning after my shower before work.  Sometimes the reality is different to the fantasy and we need to adjust things to make it work in the real world and to fit around the other aspects of our lives.

After the three months locked I took a break.  I thought that I wanted to be locked longer, but I wanted to take some time before I made the decision.  Around Christmas time I decided that I’d try and lock for a year from 1st Jan 2019.

Again, I struggled with overnight and despite a few attempts I ended up unlocking overnight.  For the first part of the year I was very good with adhering to it, but as summer came my work stress increased and that combined with some issues with the devices I was using meant that I was spending less time locked.  Given I suffer with stress at the best of times, the additional load of not being locked properly was weighing on my mind.  I was frustrated that I couldn’t live up to the goal I’d set and I was finding the combined effect of it all difficult.  In the September I decided to quit the year locked and focus on getting myself in a better place stress wise.  It’s important to consider your mental health as well as your physical health.

Regarding physical health, there doesn’t seem to be any research into the long-term health implications of chastity.  It’s important to listen to your body, if you are aching then unlock.  Likewise if there is chafing or soreness unlock and wait until it has healed to try again.  I’ve discovered that shaving every day and using vitamin e oil seems to help my skin.  I’ve got very sensitive skin and can get dry and scaly skin after shaving if I don’t moisturise.  Regarding cleaning, I unlock and clean twice a day, once in the morning and again when I shower in the evening.  Some folks find cleaning in the shower while locked enough, but I err on the side of caution and ensuring  I’m clean with my sensitive skin.

Now I’m starting to try being locked again, and it’s going better. I’m in a Holy Trainer v4 Nano, which is definitely better made than the House of Denial cages.  I’ve been starting to build up the time wearing and have managed to do a few days and nights at a time now.  Between the regular cleaning, daily shaving and the vitamin e oil, I seem to be getting on with it better, and I’m hopeful that I can spend more time locked than unlocked before too long. I think with chastity it’s a case of trying things and finding what works for you.

Speaking of which, there’s a number of Doms who seem very keen to set and enforce rules for subs and many subs encourage the locking up of their peers. While a large part of the appeal of chastity is about giving up and loss of control, it’s important to do this to degrees you feel comfortable with, with people you feel comfortable with.  I often wonder how many of the chastity Doms on twitter have actually locked up themselves, not that many I suspect.  It is also important if you keep a sub locked that you check in on them and support them, as you may have gathered it can be tough going and without things to keep it interesting it can get boring and loose appeal.  Try having goals or rewards at which point the sub gets to cum (it could be from prostate or ruined, you don’t actually have to let them enjoy using their cock).  But leaving a sub locked long period from the result of a twitter lockup RT and not supporting them through it isn’t fun or healthy. Needless to say, be careful who you send your keys to and keep a spare or have a plan for if they don’t return them.

I think chastity can be tough, and the tendency for a mob mentality of “lock him up and throw away the key” can put pressure on people and make it seem less accessible as a kink. But as with all kinks, it’s /your/ kink, explore it in ways that are fun for you and healthy.