A New Year (How to get fucked in a club) 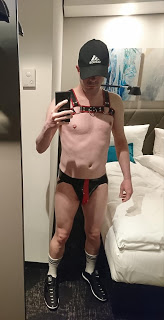 I’d gone to the club on my own, dressed in my Adidas chilie trackie bottoms, adidas sock tuckins and my current favourite sneakers, my black airmax plus on my feet.  I had a rubber jock and a harness underneath and a Gear Berlin “Locked” tshirt on top.  And yes, my dick was locked and had been since mid-October.  I was hoping for some hot action with some German Prolls.  I was not to be disappointed.

I checked my jacket and grabbed a fanta at the bar.  I got chatting to a couple of guys for a bit.  It was a non-dresscode night but because of the Socks n Sneaks events there were a good number of people in gear and lots of hot sneakers.  After being social for a bit, I decided to go downstairs to the darkrooms.

The staircase curved down, dimly lit by red lighting.  The first room had some padded seats, ideal for sniffing, and a cage.  Then going down a couple more steps there was a room to the left and some dark corridors and side rooms.  After a look around the corridor and siderooms I went into the lower left room.  There was a back area, a sports horse, some room to sit on one side and a concrete floor.  It was empty, but a lad came in wearing chilies and an Adidas top.

I made a move towards him and said “Wie ghets” but he didn’t bother replying.  We grouped each other’s trackies and then began snogging.  I felt his crotch and he was hard, so I dropped so my knees and gave his black Adidas sneakers a lick while he loosened his trackes.  I got his hard cock out, already tasting pre and started sucking and soon he had his hands on my head controlling the pace.

Soon there was a second guy next to us, in full black Adidas trackies.   He had a huge thick cock in his hands, almost the girth of a coke can.  I started wanking him off while I sucked the first guy and was soon forced down on his cock, alternating between the two of them.  Then the second guy got more dominant and forced me down further on his cock, making me gag and almost vomit a few times as I struggled to take him.  Then I had his sock in my face, while I kept wanking the other guy.  Then a sneaker kicking on my locked dick.

Then one guy said he wanted to fuck me.  I pulled my trackies down and he pushed me over the sports horse.  He grabbed some lube and pushed in me raw, finding the harness under my t-shirt and grabbing me by it to fuck me hard.   His cock pounded my prostate and I couldn’t help but grunt and moan loudly as he fucked me.  It was almost too much but I was determined to get his load in me.  After a relentless fucking he shot his load in me.  I pulled up my trackies and went upstairs to get a drink, leaking his spunk from my hole.

I got chatting to some other lads upstairs and we had a glass of Champagne and counted the new year in.  Then after a while I went back downstairs to try and find some more action.  I don’t recall the exact order of events, but I got some.

The guy who had fucked before wanted to fuck me again, so I bent over a stool while he pounded me hard.  Then he decided he wanted me in a sling.  I took my trackies off and got my legs up.  He shoved in me raw and pounded me like an animal with me nearly screaming.  The position meant my prostate took the full brunt of it.  I was about to try and ask him to stop when I shot a load in my cage.  When he was done, another guy moved to try and fuck me, but after the anal orgasm I needed to recover!

I then got chatting to another guy who was into giving foot massages.  He gave my feet a working over a couple of times during the evening, massaging and then licking my feet.  At one point another guy put his stinking socks and airmax 90s in my face while my feet were getting worshiped and sucked.  I was audibly moaning in pleasure.

At another point I was helping tease an American lad who was also visiting, he was in footie kit.  He had socks in his face and I teased his dick with the soles of my vapormax – he’d not come across them before.

By the time it got to about 3am I’d had a great evening.  I probably could have carried on and maybe had some more fun, but I’ve learnt to quit while I am ahead and things are good.  So I grabbed my coat and headed back to the hotel and decompressed before tucking up.

I will most definitely be back to Koln.